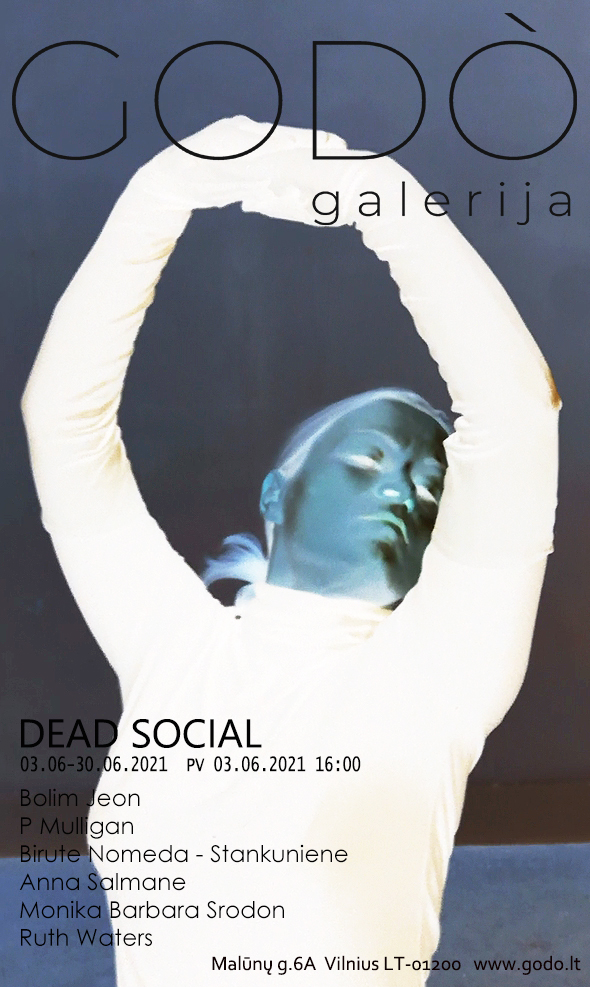 Vilnius art space “GODÒ gallery” is presenting the international group exhibition “DEAD SOCIAL” which brought together six female multi-disciplinary artists to critically reflect on the subject of death in the social media context.

The exhibition raises questions that have become relevant in the digital age: does internet technology guarantee immortality through publishing online? Are we indulging in self-pity and enhancing our self-image when people we love die and we grieve publicly? Is what is intimate and private considered valuable when it cannot be shown? Our understanding of identity and subjectivity has changed. Social media offers the type of publicity platform previously available only to the famous. In the digital age human life is reduced to data so if something is not documented it means it never happened.

Despite manifold approaches to the theme artists discuss important subjects such as: online presence, pretence, grieving online, fear of eternity and immortality, sacred vs. profane, atavistic urges, or the role of social media in politics, with both distance to themselves and a lot of sense of humour.

BOLIM JEON (KR) is a Korean interdisciplinary visual artist based in London. She obtained her BA in Broadcasting and Film and BBA in Business Administration at Ewha Womens University in Seoul, South Korea. She is currently pursuing her Master’s degree in Information Experience Design at the Royal College of Art, London, UK. Despite not majoring in art and design, Jeon is very inquisitive and has an understanding of art. She is often inspired by her own stories and willing to pursue experimental approaches to depict modern society. Jeon has been using diverse forms of expression including drawings, installations, and videos, to find the best way to convey her concepts. Her major interests are: the repetitive routines of human behaviour, and subjectivity. She often discusses themes such as: rituals, human gaze, relationships and taboos and brings in unique conceptual objects from completely different disciplines.

BIRUTE NOMEDA-STANKUNIENE (LT) lives and works in Vilnius, Lithuania and is a painter. Her road to the world of arts has been full of unexpected discoveries and challenges. After graduating from Kaunas University of Technology in 1987, she worked as an engineer and administrator, and almost two decades later, in 2003, delved into her lifelong passion and became a professional artist. She graduated from Vilnius Academy of Arts in 2009, and then fully immersed herself in her creative work. In 2017 she attended Contemporary Painting Course at Slade Summer School and in the next year was granted a residency there. Nomeda-Stankuniene works with traditional media, choosing clear and intense colour pallets for her abstract expressionistic paintings. She is interested in the fragility and relativity of human existence.

Nomeda-Stankuniene has held three solo exhibitions in the UK, where her works received coverage by regional and international media, including the BBC Radio Solent and CNC News/Xinhua (China’s National News Agency). Based on the artist’s paintings, the book titled Seven Feelings According to the Book of Job was published in 2011 and she has been featured in the publications of the IUOMA, Slow Art Day and Hieronymus Bosch Plaza.

P MULLIGAN (UK) is a lecturer and practising visual artist living and working in London. Mulligan’s practice spans painting, printmaking, and writing, investigating the relationship print-based and digital photographic imagery has with painting and the political, historical and psychoanalytic frameworks revealed through the reframing capacities of the painting medium. Mulligan is obsessed with contemporary political cultures and their digital incarnation, mining them for older histories and deeper strands of the atavistic unconscious. A graduate from Goldsmiths’ Fine Art BA and Edinburgh University General Arts MA (majoring in Art History & Anthropology), Mulligan recently completed postgraduate study with Turps Banana, London, UK.

ANNA SALMANE (LV) is a visual artist living in Riga, Latvia. Salmane’s works range from ink paintings and clay sculptures to sound installations and photography. Her works deal with feelings of loss, vulnerability, and peril, often in a playful tongue in cheek manner. Some of her recent inspirations include the life of the desert ballerina Marta Becket and the geological phenomenon of ‘sailing stones’; Bertha’s character in Charlotte Bronte’s novel Jane Eyre and online images of Ukrainian homes destroyed during the war with Russia. Taking an already existing material and reworking it according to her perspective, gives Salmane the chance to re-imagine boundaries between fact and fiction.

Salmane was awarded an MA in Philosophy, the University of Latvia (2007) and a BA in Fine Art from Goldsmiths, the University of London (2014). She has had her works exhibited in solo and group shows in Latvia at Latvian National Museum of Art, Latvian Museum of Writing and Music, and Latvian Centre for Contemporary Art, as well as internationally at Tartu Art House in Estonia and ArtLacuna, London; Surface Gallery, Nottingham, the UK, and others. In 2017, Salmane received Latvian contemporary art award Purvīša balva for the collaborative artwork Song.

MONIKA BARBARA SRODON (PL) is a mixed-media installation artist and curator based in London, UK. She studied BA Fine Art at Goldsmiths, University of London (2015), but also has an MA in English Philology (2002), specialising in American literature from the University of Silesia, Poland.

Srodon’s works are often carefully constructed and multi-layered. She enjoys expressing her ideas through colourful sculptural work, painting, collage and performance but her practice is predominantly lens-based. Srodon uses her own subjective experience as a reference point and is particularly interested in aesthetics as central to art, politics and social order. She has been fascinated with photographic negatives – their visual quality, meaning and symbolism, and has been using them in a variety of ways. Themes in her work include: the negative aspects of gentrification, regeneration and advertising, the impact of internet on humans, and social media‘s complicated relationship with free market capitalism.

Srodon exhibited in various London galleries. Recent projects include: Invasion Manual or How To Act In Extreme Situations Or Instances Of War (Art Lacuna, 2016), SoLow Show at Backroom Gallery (2016) and Death in the Age of Social Media (Deptford Does Art, 2019). She was the recipient of Space Studios Graduate Bursary Award (2015).

RUTH WATERS (UK) works with film, sound, animation, text and installation. Her practice explores the ways late capitalist networked society impacts our levels of anxiety. She explores the relationship between our mental health and broader social and political issues through interviews, writing scripts, working with actors and creating video works. These are often darkly humorous reflections on what is to experience – and try to overcome – anxiety. Waters is currently AIR at Kingsgate Workshops, London and has recently completed a 100 day research residency at ARCUS Project in Japan. She holds an MFA in Fine Art from Goldsmiths, University of London.

Recent shows include Push Your Luck, Island, Brussels (2019); All About You, Koppel Project Hive, London (2019); The Moscow International Biennale for Young Art, Moscow (2018), White Shadows at Wumin Art Center, Cheongju, South Korea (2018); Seep at Peer Gallery, London (2017); Cacotopia at Annka Kultys Gallery, London (2017) and Solopreneur at Kingsgate Projects, London (2016). She was the recipient of the Goldsmiths MFA Studio Award 2016 including a grant and a year residency at Acme Studios. Her first solo show opens in 2021 at Kingsgate Projects, London.